Lodi dynasty ruled from 1451 to 1526. It was the first and last Afghan dynasty to rule South Asia. The Gol Gumbad belongs to the Lodi Dynasty. The structure has a square plan that measures 13.5 meters on each side with a recessed arch and central doorway. 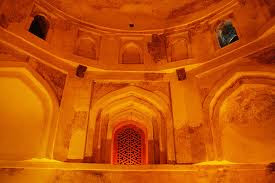 1)  The Gumbad has a square plan that measures 13.5 on each side with a recessed arch and central doorway. A staircase on the southern side leads to the terrace. The tomb is constructed of random rubble masonry with fine layers of  plaster. The colors of the tomb are breathtaking at sunset. 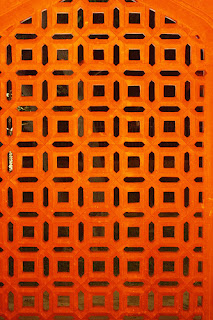 2) Rows of light are fitted on the floor; the domed roof is bathed in a bright orange glow. As you enter from the side gate (on Lodhi Road), the white light falling off the tomb's wall shows you the way. A few trees are lit subtly; others are left in the darkness. Inside of the chamber   is washed in a deep gold shade. Strobe lamps are arranged artistically at several vantage points.
3) In September 2010, the unremarkable tomb, tucked in a corner of Centenary Methodist Church, got a new look.

The tomb is a double structure plan in a square form.  It is constructed over a high platform with series of cells with arched openings in a drop arched form. The openings are enhanced  with red sandstone and beige colored sandstone. The tomb is named after Abdal Rehim khan.

1) Rehim was one of the nine Diwans, also known as “Navratna” in the court of king Akbar. The names of other "ratnas" were

2) Rehim Khan was a Iranian by origin and Muslim by   religion but he loved the Indian culture and he was also a great devotee of Lord Krishna. 3) Rehim Khan  knew more than 10 languages. He used to write his couplets in Hindi. He wrote many couplets. I am quoting a couple here which i like ...

Says Rahim, when you are introduced to an important/rich person, do not ignore or forget your poor friends for if,for example you need a needle to successfully complete a job, of what use is a sword. 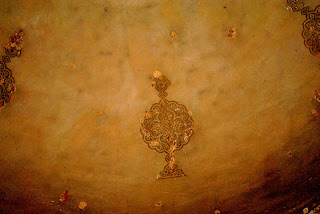